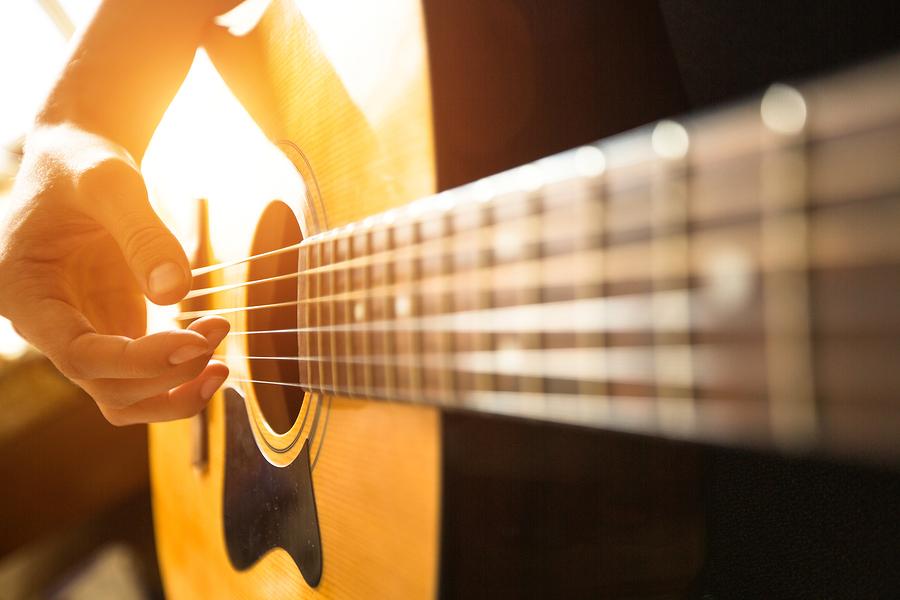 One of my main goals this year has been to work on my guitar playing. I started learning guitar in primary school, year 5 I think, but I was never committed enough to put in the practice at home.

Because of this, I ended up playing off and on for years, and so didn’t make much progress. In high school I started off playing guitar and singing in junior years, but gradually became accompanied by others until I barely played at all. It didn’t really occur to me until I wanted to start doing gigs and was so nervous to play on my own, because I wasn’t confident with guitar.

There are so many things to learn, when it comes to any instrument really. It was hard to know where to even begin. I already had basic chords and chord changes down, so I tried to think about the style of guitar I like to listen to. This is when I decided I wanted to work on my finger style playing, plucking the strings instead of strumming.

I didn’t have very good accuracy or dexterity on either hands, so I knew it would be a challenge! First, I found songs that I already knew and liked that I could also sing along to once I learnt them. These two songs were Landslide by Fleetwood Mac, and Blackbird by The Beatles. I would practice them every day, or at least as often as I could remember, until I could play along to a beat/metronome.

Surprisingly, once I began to sing over the top, I found it easier to play. Since then, I have added Landslide to my set list and it has been quite successful. Blackbird still needs some fine tuning, but I can play the whole song now, just a bit slower than the record. My current project is the song Keep Your Head Up by Ben Howard. He is an amazing guitarist and his songs are mesmerising to me.

Other aspects of guitar that I would like to focus on are scales, learning notes on the fretboard and then creating awesome jazz chords. Hopefully this knowledge will help me to be able to solo and write more complex music. I had a man come up to me between songs the other day while busking, and he asked for some tips as he was a beginner guitarist.

He told me he already practices every day and that was the biggest pointer I could give him. My playing has significantly improved this year purely because I pick up the guitar more often, and play for longer periods of time. I often think to myself I wish I had started sooner, but I just have to do better from now.

Where to look for some help to play casino?
Banjo vs Guitar: Key Things to Consider