The physics of lead guitar playing 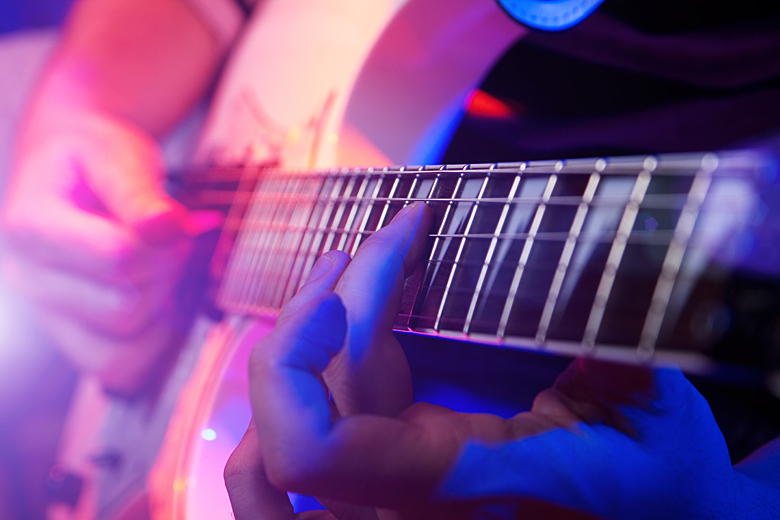 String bends, tapping, vibrato and whammy bars are all techniques that add to the distinctiveness of a lead guitarist’s sound.

‘Very good guitarists will manipulate the strings to make the instrument sing,’ explains Dr Grimes. ‘On a piano, you’ve got the 12 chromatic notes in a scale. On a guitar, you can bend the strings to get the notes in between. I wanted to understand what it was about these guitar techniques that allows you to manipulate pitch.’

Dr Grimes is a postdoctoral researcher in Oxford University’s Department of Oncology, and normally spends his time working on mathematical models of oxygen distribution in order to improve radiotherapy in the treatment of cancer.

But he is also a keen guitarist, and has been a session musician and member of a band in Dublin in the past. In spare time at his previous position at Dublin City University and now at Oxford University, he worked out the physics behind the instinctive playing of the best guitarists.

Dr Grimes derived equations describing how string bending, vibrato and whammy bars change the pitch of a note. He found that the properties of the strings had a big effect on the change in pitch – in particular the Young’s modulus (a measure of how much the string stretches under force) and how thick the strings are.

He also worked out how easy hammer-ons and pull-offs are, depending on the height of the guitar strings above the finger board.

Finally, he confirmed the equation for string bends experimentally, measuring the frequency of the sound produced for strings bent through different angles on a guitar.

Dr Grimes says: ‘I took one of my oldest guitars down to the engineering lab at Dublin City University to one of the people I knew there and explained that I wanted to strip it down to do this experiment.

We had to accurately bend the strings to different extents and measure the frequency produced. He was a musician too and looked at me with abject horror. But we both knew it needed to be done – We put some nails into my guitar for science.’

The physics of vibrating strings and string instruments has been long understood. But no one has previously worked out how effects like bending the string change the pitch of the sound. Nor how this depends on the tension of the string, the force applied, and the angle through which it is bent.

‘It turns out it’s actually reasonably straightforward,’ says Dr Grimes. ‘It’s an experiment a decent physics undergraduate could do, and a cool way of studying some basic physics principles. It’s also potentially useful to string manufacturers and digital instrument modellers.’

As for Dr Grimes’ guitar heroes? He says: ‘Dave Gilmour of Pink Floyd has the most amazing bend control. And Steve Vai is the kind of guy you hate for his sheer talent.’ But it was perhaps another physicist and guitarist who inspired him to play in the first place: ‘I think the only person I ever wrote fan mail to was Brian May of Queen – He was one of the reasons I got into playing music. It’s still one of my life’s ambitions to have a conversation with Brian May.’