The science of playing guitar 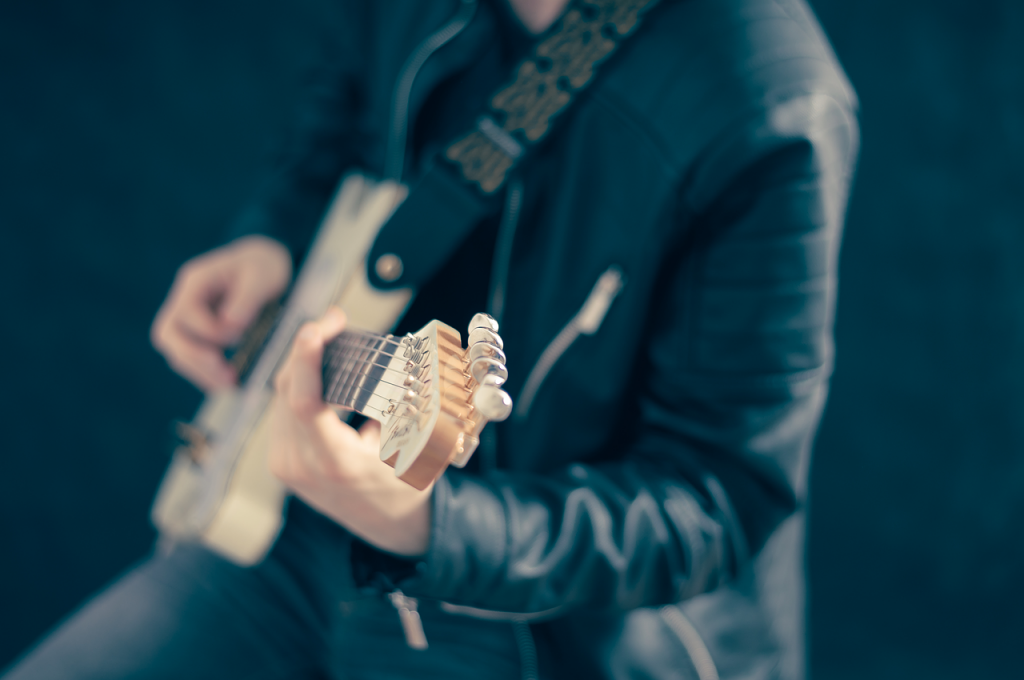 You’re probably familiar with the sound of the electric guitar, which has dominated popular music for decades. But you may be less familiar with the techniques that some lead guitarists use to get expressive, voice-like sounds from their instruments, by subtly bending and vibrating the strings with their fingers as they play.

David – Any guitarist who plays has these intuitive techniques they use. Now, one of the reasons that guitar is interesting I think to most guitarist is the amount of expression you can get with it. When you’re playing something like a piano where pitch is going discreet, you’ll go between notes and you’ll hit a C or a C-sharp and that’s provided the piano a tune correctly, they’re the notes you’ll hear. When a human voice for example sings, we hit a note, but we shake around it. We put a natural vibrato on which we can control. That makes it quite nice to listen to.

On a guitar, your pitch in a similar way is not discreet. You can actually bend up in the microtones between notes and you can explore that and it gives it a human vocal quality to the guitar. You have to do is mechanistically, you have to manipulate the strings to get this. I think that’s the motivation that I started with. I said, “I want to see what’s happening from a physics perspective when I do this and why I get this pitch out?”

Kat – So, how did you go about trying to understand what’s going on here?

David – The mathematics and physics of stretched strings have been known since antiquity. And I think any A level, or if you’re in Ireland, Leaving Cert students will know the equation of the first stretched string which is related to its length and its tension and its linear density. So, I started and said, “Okay, let’s see what happens if I’m bending string and readily displacing it from the fretboard.” Now, I said, “If we do a force diagram of that and we work out what’s happening and what tension forces are being added and let’s see what the net result is.” That’s it. It started as an incremental step by step starting from a stretch string and then applying forces to it to see what the net effects would be.

Kat – So, that would be like a guitarist kind of bending a string up on a fret as they’re playing a note.

David – Absolutely and seeing what happens to it pitch-wise when you resolve all the vectors and you add all the tension forces together, what are you left with and what impact does that have on pitch.

Kat – So, what can this model, this mathematics that you’ve worked at, what can it actually tell us about playing the guitar?

David – I think it was the mathematician G.H. Hardy who made a comment that he was delighted that none of his work will ever be useful. Sometimes I think a description like that might apply to some of my hobby work. But what it can do I suppose that would potentially be useful is, there is an abundance of different string types available to a player. If they want to pick a string for example that doesn’t bend much, they might look at – they may do it intuitively – but if they wanted to quantify, they might look at the equations and say, “Yeah, I need a string that’s relatively stiff and ideally has a large area and that will stop from bending when I don’t want it to.” Conversely, if they want to do big Eric Clapton style events, they might go for the exact opposite and even quantify what the best material is, based on these equations if they so desire.

Kat – There’s an increasing number of computer programmes that are mimicking different instruments and different sounds. Do you think your mathematics could be useful for those?

David – In theory, yes. I play keyboards as well when I’m unfortunately roped in different bands I play in, and one of the things, if you’re simulating instruments, I think most guitarist will notice that when you put the guitar string that you run, it sound diabolical. It’s not even passable. I think a lot of us, due to the fact that it doesn’t factor in the mechanics of human touch on that and how we explore around the string. So, someone was into digital instrument modelling and they wanted to say, factor in things like bending in the more natural way or even guitarist vibrato which I covered in the paper as well, in a more natural way. They could certainly use those equations for that.

David – That is a question I wrestle with every day. I see I’m into very non-cool genres of music. So, I mean, I probably would say John Petrucci from Dream Theatre is my favourite guitarist but I have the guys like Brian May I’ve loved since I was kid and Steve Vai and Joe Satriani. So, to take one of them, it would be like choosing between childre, I just can’t do it.

Ginny – I’m a big Red Hot Chilli Pepper fan, so I really like the guitar work in that or my parents used to play a lot of Eagles and there are some great guitar solos in the Eagles. So, probably one of those guys.

Chris – You didn’t pick the Gilmours or the Townshends. I was a bit surprised. You’re not The Who or Pink Floyd fan?

Ginny – Not so much. Kind of passed me by.

We crunched the numbers on ten recent ‘world’s best guitarist’ lists. Where are the women?
Top 5 Reasons Why Playing Guitar Is Good for Your Health & Mind